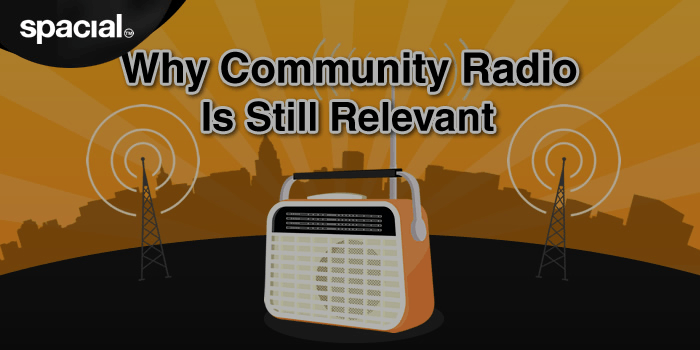 Why Community Radio Is Still Relevant

In today’s digital age, content is increasingly on-demand. People can listen and watch whatever they want at any time. With the advent of streaming services such as Spotify and Youtube, anything from news to music updates can be found quite easily and at any time, making radio – at times – feel irrelevant. However, radio is very much still alive!

In fact, radio has overcome many challenges over the last few years. People still tune in to the radio, whether through their computers, phones, or while in their cars for both information and entertainment.

For audiences living in relatively small towns with small populations, local news is not usually available via mass media streams such as commercial/national radio stations, TV, magazines and newspapers.

Community radio stations play a pivotal role in relaying localized information including news, sports, and weather forecasts that pertain to a single town or city. Community radio helps disseminate local information to people in a clear and informative manner.

Language barrier can be a challenge when it comes to effective communication, which is another reason why community radio stations remain important. If the place you reside in has a certain dialect, then national radio stations may not be the most effective way to communicate clearly with you and your peers. If you like listening to news and updates in your local dialect, then community radio stations are the way to go as they deliver content in local dialect, which is more easily understood by their target audience.  This also encourages participation from the community members on pertinent issues that concern the community, who would otherwise may not have participated due to language differences.

Community Radio Stations for a Good Cause

Community radio stations are also playing an important role in spreading goodwill, sharing information, and improving local communities. One example is Palang Merah Indonesia (Indonesian Red Cross) radio station, which was established to help the local community better understand the function of the Red Cross – a crucial understanding to have given the threat of earthquakes and tsunamis in the region. The radio station plays an important role in communicating pertinent information both during and after a disaster, when telephone lines may otherwise be down.

Churches and other non-profit organizations have also started community radio stations to communicate with their members and target audiences.

Perhaps the best thing about community radio is the exposure that it can lend to local talent. Community radio stations play a critical role in providing local talent with exposure to their communities, who can then share their content and help to grow their popularity and follower engagement.

One of the most appealing things about community radio is how personal it is. Rather than simply streaming music, interviews are conducted by local community members. Not only do they regularly converse with other members of the community, but they also try to deliver content relevant to their listeners, speaking the same dialect and tailoring the content for the region that their target audiences live in, creating a truly personal and engaging experience.

In addition, community radio offers a great reprieve from daily life and gives people a chance to be a part of something bigger. Community radio continues to provide personal experiences that are contributing to building and uniting people within a region, making it relevant in today’s world.

If you are part of a community that can benefit from your content, why not start your own community radio station today with SAM Broadcaster Cloud. Give it a go with our 7-day free trial today!