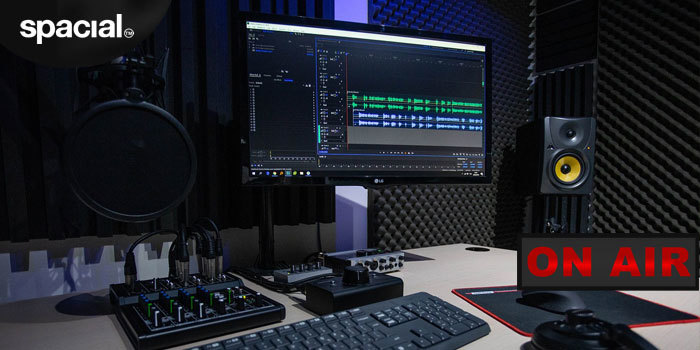 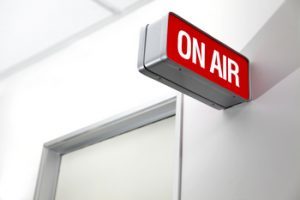 Live broadcast on your Internet Radio is only as good as the amount of preparation you put into it. Not all audio is good audio. Take, for example, the ‘bmmmppfff’ of a mouth kissing a microphone, or (even worse) the sound of dead air especially when doing a live broadcast… There are dangers lurking in a DJ booth, no doubt about it. And a live stream can’t paper over any mistake; it’s just you, a control switch, and a bead of sweat pooling on your forehead.

But don’t fall into a cringe-worthy trap before your listenership! With Spacial’s timely advice, you’ll be ready for live broadcast software, and never risk a mistake you can’t undo.

So, gentle radio DJ, read on for our best live broadcast prep tips:

Ensure the studio is totally soundproofed when doing a live broadcast

We’re launching into this subject by assuming, as is often the case, that you’ve got a personal room to call your own. It might be in the house, or at the farthest edge of your work environment. Seems quiet enough, doesn’t it? Surely nothing can intrude on your live broadcast…

Trust us: life will make other plans. From car alarms to the teeth-rattling sound of a construction drill, live streams can be hijacked by something beyond your control. Avoid intrusion by soundproofing every inch of space, either with carpet or adhesive panels.

If you go to the trouble of wrangling a fascinating interview subject, it’s crucial to keep their voice clear, audible, and free of distortion. Live broadcast software can trip you up when an awful realisation occurs – no-one has a clue what the two of you were saying, because the microphones were waaaaaay too quiet.

Conversely, they might be propped too close to your guest, and have the opposite effect, making their voice pop and fuzz. Do some test speech (“One-two-three” etc.) to set the appropriate sensitivity level.

Have the subject matter in front of you when live streaming

This can be done in any form you find useful. Bullet points, flow charts, the wavering clouds of a mind map… All viable ways to remember what you’re supposed to be talking about when live streaming.

Everyone gets stuck for speech, of course, but live streaming doesn’t take any prisoners when your brain is wiped of thought and logic. Long, flustered pauses are toe-curling to hear. Write down any and all stuff that’s essential to the programme. We’re thinking of facts, names, jokes, references, or the ascending sway of an argument.

Know your schedule for in-the-field reporting

Many radio DJs when doing live broadcasts like to cover fetes, gigs and demonstrations in their local area, as well as topical issues on the street. You may have a wish list of contacts to record, presenting their views/activities to your live audience. Yet, unless a schedule’s in place, we’re guessing it won’t be as seamless as you’d like.

That’s why it’s essential to plan a who’s-who and where-to of the day. Someone may be tied up, for instance, before they can make an interview slot – how are you going to fill the time? As another example, consider music festivals: they’re organised to very specific agendas, meaning you have to be aware of who’s playing at what stage, if you’re trying to capture the show.

Make no bones about it… live broadcast software can set your audio skills aflame, netting a listenership who value control and quick thinking. Invest in our SAM packages, which come with live streaming, for a tool that’ll never stifle your on-the-spot ambitions…