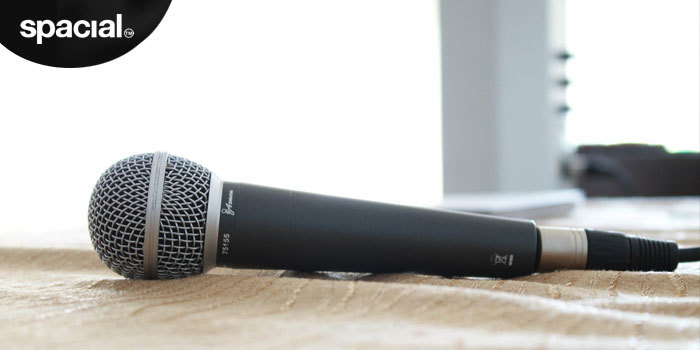 An Essential Guide To Radio Microphones for Radio Broadcasters

Being a radio broadcaster takes smarts, imagination, and a willingness to explore the right tools for the job. To jump from that first idea to a full, professional internet radio station, you must embody the sound of success. And that means looking for radio microphones that won’t let you down.

Radio industry trends may come and go, but they all require great mic tech to be realized. It’s about time we gave you the lowdown on how they function, what effects they provide, and the kinds of programming they’re suited for. With a solid pick, your station will be crisper and clearer than ever.

So, make yourself comfortable, and plug into Spacial’s guide to radio microphones …

The starter question – condenser or dynamic?

If you’ve touched on this subject before, it’s likely you’ve come across two terms: ‘condenser’ and ‘dynamic’. These are the two main microphone categories. They relate to the way in which the mics are designed, which changes the sound you’ll produce at the mixing desk.

First off, let’s look at condenser microphones, the more popular variant for a closed recording space. Also known as ‘capacitor’ mics, they function via a conductive diaphragm. The conductive diaphragm refers to a whisper-thin sheet of metal that’s moved away and towards a large plate inside. Older versions may use foil for the membrane. However, most of them are built from mylar, a fusion of plastic and evaporated steel. Steadily, the sheet changes distance with the metal plate, slowing or speeding up the frequency of the sound waves passing between them.

The capacitor isn’t very large – therefore, it’s able to pick up audio with greater finesse than its dynamic cousin. Very few sound waves will escape it. Both low and high frequencies – the bass note from a guitar, or a sudden burst of laughter – are rendered in more detail. As a result, the aural texture of your recordings are broader, making for a sharper listening experience. The energy outputs are fairly low; you’ll need an external power source to keep it running.

However, as a radio broadcaster, you may be fond of live reporting, in situations that are thick with intrusive background noise. Dynamic microphones are a safer choice for vox pops, gig streaming, and outdoor interviews. They’re constructed as a heavy coil that has another diaphragm alongside it. This time, though, it vibrates, creating electrical signals in a magnetic field.

You can think of it as a rough-and-ready microphone that’ll cut out the hum of a crowd when you’re focusing on one audio source. Because the components are bigger, it’s less sensitive to sound waves… You’ll be able to record very loud noises with less distortion than the condenser. It’s also a lot more resistant to wear and tear, so you can use it for ad hoc street reporting.

So, the wise radio broadcaster chooses which radio mic type suits their aims. Hundreds of models are waiting for you. But as you’re browsing the web, you’ll want to know more about technical specifications, or at least have a basic idea of what they stand for…

Radio microphones are labelled with a Hz range. It’s part of the complete list of frequencies, from lowest to highest, that the human ear can detect. Every instrument, voice, and natural sound falls somewhere on the Hz chart. Microphones can vary greatly according to which frequency range they’re matched to. Get it dead on, with whatever you’re recording, and the closer it’ll be to the ‘real’ sound.

Manufacturers tend to have backup frequency charts for every mic they sell. Such information should be forthcoming, so check before you buy! The chart splits between a 0 gradient, with -10 and +10 decibel levels on either side of it. This denotes how (respectively) quiet or loud the microphone will perform against the Hz of any recorded audio. If the graph rides on the 0 mark at certain points of the Hz range, that’s the frequency it’ll be best able to translate.

For instance, a condenser microphone designed for 35khz-18khz can work with any noise in that scale. Yet it may hover to the 0 (neutral) decibel count when it hits 85hz or so – the sweet spot for an average male voice. That’ll result in a warmer, textured tone when you’re speaking. Another mic might lend advantages for female radio broadcasters, who often have a higher pitch, talking in the 165-255hz zone. And for live music, the scope of your choices is considerably larger – there’ll be much to consider for the scenarios ahead.

How they link to your internet radio station kit

We’ve given you the lowdown on the types of radio microphones, their specializations, and the vital role a frequency setting may play. Yet this is all for nothing unless you have quality, state-of-the-art radio broadcaster equipment to meld your mics to.

A processor helps, if you have the cash. They plug into your computer or laptop, acting as an extension platform (eight mics could be better than one!) and multi-band mixing unit. Simply put, you can do so much more with the audio… Prefiguring the host’s mic so it’s louder than the others, for example. Or perhaps adding equalization, smoothing out spikes in the pitch.

Many radio microphones connect to PCs regardless through a USB port… Total newcomers to an internet radio station might be happy with one or two mics, leaving advanced processing tools for a later date. But in either case, you should invest in a boom arm. This will raise the mic off your desk and increasing its maneuverability. People can adjust it if they have to – ideal for guests who are readying for a live stream.

Finally, we can’t stress the perks of the best radio software on the market. Spacial’s SAM Broadcaster Cloud is the nexus of your DJ dreams. This is a clever, automated solution for playlist and schedule management. In no time, you’ll be dragging song cycles to life from a digital library, and finalizing a web platform that’ll let listeners tune in around the world. Buy SAM Broadcaster today, and tie a bow on your careful audio selections for all that lies ahead…