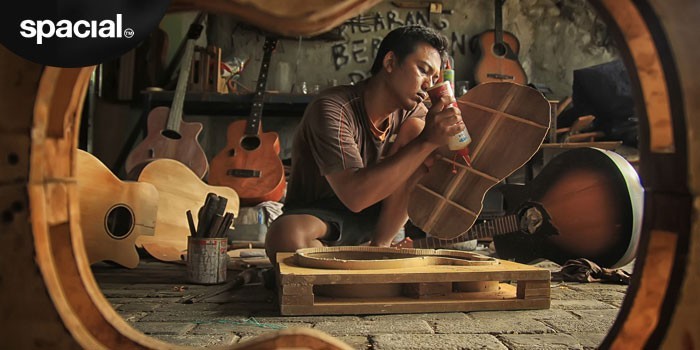 I was having an email conversation with the proprietor of a new radio listings website and the subject of genre came up.  He was unable to list one of my stations because it did not have a defined vertical, that is, he did not believe my station had a defined single market and to be honest, I took that as a compliment.  I considered how the vast majority of traditional, AM/FM stations around the world played eclectic mixes of popular music interspersed with various programs designed to appeal to specific listener groups.  Most stations would usually include some programming designed to give air time to unsigned artists and bands, you could usually find a station has a folk or country program, perhaps a Latin hour and so on.  This posed the question in my head, why would any station only want one sound?

One of my stations which will remain nameless has traditionally been used to provide demonstrations, training and to create video tutorials, it was never designed to be a successful station, not even a listened to station but it seems the steps I have taken to create some of the video tutorials has led to a small but loyal following as well as quite unexpected listener statistics.  I was told that my station does not have a traditional vertical although I did argue that being curated by a child of the 70’s and 80’s and with my peers in mind, would this not qualify as a vertical in its own right?  The music being played you could expect to have heard as a child growing up in the 70’s and 80’s on traditional radio, the music being bought at the time on dear, sweet vinyl (did anyone else cry when they discovered a scratch which would jump 2 tracks on one of their favourite albums?  I did but then I was only 11).  This station also plays the music our parents played in the car on the 8-track which reminded them of their youth, this is what I was brought up on (The Rolling Stones, Johnny Cash and Gilbert O’Sullivan amongst others – go figure).  I also curate music from unsigned artists which appeal to me and I hope, would also appeal to my contemporaries.

This started me thinking about Internet radio stations and the various genres available.  If you look at the plethora of available genres you can choose from, you might imagine that every possible taste has been catered for but does that bring in the listeners?  I would have to say that some genres are definitely well catered for in both the choice of stations to listen to and high listener statistics.

Religious radio when done well attracts huge numbers of listeners and whilst you would not usually hear lengthy religious segments on traditional, eclectic radio, this Internet radio genre has enabled some stations to develop a respectable following.  Out of all of our customers who reach out for assistance or who might have a question, one other genre stands out and I bet you would never guess what this genre might be.

Click here to find out (or simply carry on reading)This genre is seeing listener numbers which shocked me at the time to be honest but when you think about it from a tangent (and boy what a tangent), perhaps this makes sense.  The traditional listener of a religious station has something in common with the listener of a death metal station; in that I mean it is more a way of life than just music.  When I visit station websites for both genres, each genre has a visible commonality.  You could almost take any photo from any religious station and add it to the gallery of another religious station and it would not look out of place.  The same could be said of any photo from a death metal station.  These photos usually include a lot of leather, denim, motorbikes, guitars and beards.  For my money, the majority of other ‘traditional’ music genres are not so easily identifiable.  I selected ‘Adult Alternative’ as one of the genres for my station but what does that mean?  Am I identifying my station as a place for alternative adults?  Is a child an alternative adult?  I hope not.  Do I mean this is music for adults who enjoy an alternative lifestyle?  Perhaps but there are so many degrees of alternative to choose from that I could not possibly identify with all of them, could I?  I take this to mean my station is curated for adults and it is an alternative choice away from mainstream, commercial plastic pop.  This makes sense to me because this is what I was going for.

I would suggest that whilst most stations in South America might qualify under one of the various Latin music genres, this is not a conscious choice to be a station of this genre but is based on heritage and as such, I would discount this when I say it is the authors considered opinion that traditional terrestrial stations do not have the physical reach to make any genre-based station viable.  The medium cannot usually overcome the curvature of the earth (please don’t call me out on this and refer to Long Wave radio bouncing off the various layers of the ionosphere at various times during the day, this is not a viable, commercial solution and at times, is painful to listen to).  This means any terrestrial radio station has a fairly distinct limit based on the location and power of the transmitters.

Online Jazz stations are failing because they do not have the listener numbers to make them commercially viable so it would follow that any traditional Jazz station would also fail unless they were strategically placed in a traditional Jazz stronghold like New Orleans but again, this harks back to heritage more than a choice based on genre.

For me, the bottom line is this; if your station’s output is based around a single genre then I will wish you the best of luck with that, I believe you will need it.  For my money (and perhaps any potential advertiser’s money), a station only playing female artists from the state of Kentucky is an impossible sell to any potential advertiser or investor.

I don’t know if there really is a solution.  If you feel Jazz is in your DNA then do you prostitute yourself for the sake of commercial success or do you stay true to your colors and through hell or high water, continue with your labor of love?  For the vast majority of Spacial customers, their radio stations are labors of love which are self-funded so perhaps we already have the answer but whilst most of our customers might tell you that they are not in it to be famous or to make money, I would seriously doubt any or certainly many would say no if Sirius Satellite Radio came knocking with a job offer in hand.

I can however, tell you what I have been doing, but only if you promise not to tell anyone else…

I have been using the tools and reports available within SAM Broadcaster Cloud to identify periods of both high and low as well as consistent listener figures.

I start with the recently added Analytics Summary within SAM Broadcaster Cloud.  If you don’t know what this is or where to find it, log in to your Cloud and look for the option highlighted below: 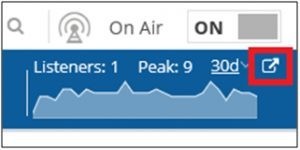 This will generate the Analytics Summary pop-up like this one: 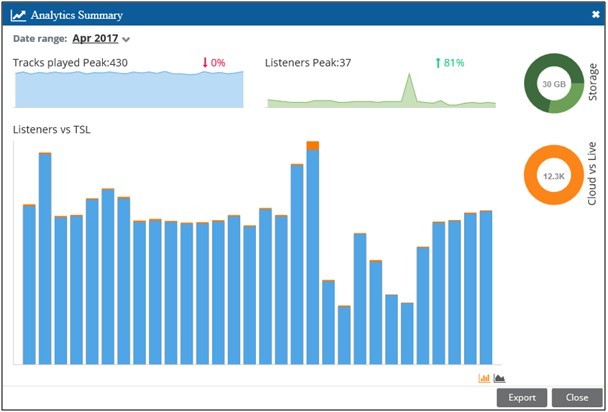 Here we can see we can select the date range, we can see the number of tracks played in the selected period (and whether this is more or less than the previous date range).  We can see the number of listeners as well as the peak listener figure and again, the difference in percentage when compared to the last period.  We can see the amount of storage used and available as well as the number of streaming hours which for this period is around 12.3 thousand listener hours for the month of April 2017.  As you can see, all of these have been streamed from the Cloud either because I believe I have a great schedule already curated or I have just been a little too busy to stream live.

I use this tool to isolate peaks and troughs.  I selected this image because of the 37-listener peak I know occurred in April 2017.  Whilst this may not look too impressive, you should remember this station is not being advertised nor promoted and you should also consider the Time Spent Listening (TSL) in blue.

We can export this data based on minutes for a 24-hour period for the last 7 days, hours for a month for the last 12 months or daily statistics for a whole year since the station started.  By exporting the data for a month we can firstly identify any peaks or troughs which we will examine further by exporting the minute stats for the days in question.  This we can quickly cross-reference with our station schedule and see which program was running at the time.  If this peak is repeated when this program runs then we know this program is more popular than others in our schedule.  Likewise, we can identify the less popular programming in our schedule by looking for troughs.

With this information we can decide whether we wish to extend the popular music programming or replace the less popular programs with more of the popular shows or something different.

One other feature of the Analytics Summary is the option to change the displayed chart from a column chart to an area chart simply by clicking the icon highlighted in the next image. 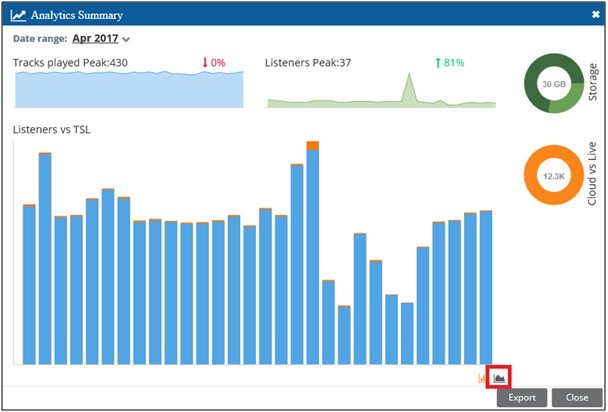 By clicking this icon, the display changes: 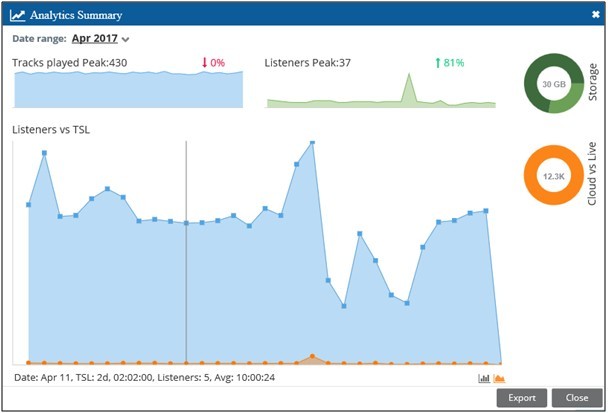 We can then if we wish, use the History Export option (right-click on the History window and select Export), to identify which specific tracks were playing when the peaks and troughs occurred.  If we see patterns, we can remove unpopular tracks from the library and increase the frequency with which popular tracks are played.  I don’t know about you but I have a fluid list of around 12 all-time favourite tracks.  The tracks in this list might be number one on any given day but number twelve on another.  The only event which can affect this list is if I hear one of these tracks too often and it subsequently drops off the list.  I would suggest over-playing popular tracks could have the same affect for your listeners and they could become less popular with your listeners.

This brings me back to the point of this diatribe; Genres.  If after all of this, you subsequently find all of your popular tracks can be shoe-horned into a single genre then congratulations, you are a single-genre station with a definable vertical.  If on the other hand you find your popular tracks are as eclectic as your own musical tastes then congratulations also, welcome to the real world where the rest of us live in apoplectic overchoice…

Buy Both and get a FREE Spacial USB Flash Drive
SPACIAL